Visitors 9
Modified 26-Apr-13
Created 26-Apr-13
75 photos
The Blue-White game scoring system again added an intriguing dimension to the culmination of spring practice, as the Blue (defense) knocked off the White (offense), 67-47, before an estimated 28,000 fans on a Saturday that featured snow, rain, wind and sunshine in Beaver Stadium.

Penn State returns 16 starters and 38 letterwinners for the upcoming season. O'Brien earned national and Big Ten Coach of the Year honors after guiding the Nittany Lions to wins in eight of their final 10 games last year, earning an 8-4 overall (6-2 Big Ten) record. 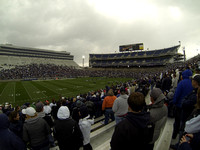